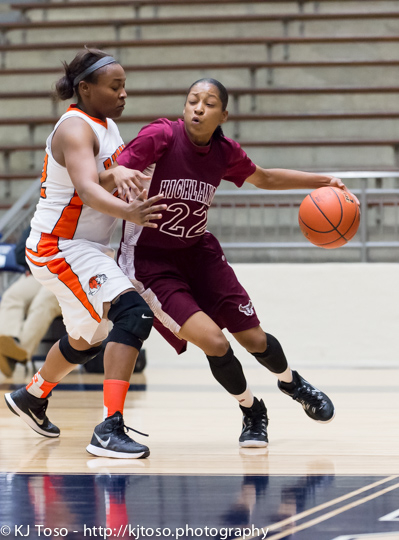 Highlands’ Aaliyah Prince (22) makes a bid for the baseline against Burbank’s Antwanisha Riddle.

Highlands is looking for ways to maintain its edge as it pursues the school’s first girls basketball district title in memory.

“We’ve been practicing against the freshman boys team,” 11th-year Owls coach Adrianna Wiatrek said. “We did it with that bunch that made the playoffs four years ago. We started doing it before the Sam Houston game, because they’re so athletic and so long. We couldn’t go against each other and get that kind of preparation.”

Highlands was halfway to an unblemished district season after claiming an 89-28 victory over McCollum Friday on their home floor.

In her years as Owls coach and her previous five years as a Southwest assistant, Wiatrek is unaware of any previous Highlands district titles. Another unanswered question is whether Highlands has ever gone through an undefeated district season.

Brackenridge (11-15, 6-2) shared second place with Lanier and Sam Houston as of Friday. McCollum was in ninth place.

“I also see Harlandale coming on through,” Wiatrek said. “I keep telling the girls it’s going to be a different second round. Just like everyone else is preparing, we have to keep preparing.”

“We’re doing a better job of coming out in the first quarter and pushing the pace,” Wiatrek said.

Aaliyah Prince led the Owls with 28 points against the Cowboys. The junior produced 30 points, seven steals and four blocked shots in a 71-33 rout of Burbank (9-15, 2-6) Tuesday.

“Aaliyah has really found her groove in scoring,” Wiatrek said. “She has been way more aggressive lately. She looks to pass when she shouldn’t. We have to have that conversation a lot, that she needs to be a little selfish.”

“Everybody runs that 1-2-2 (zone) against us.” Wiatrek said. “Jina gets that rebound and takes off. Not many people can beat her down the floor. Her three-point shots have been so much more money, too.”

Burbank was within 11-9 after the quarter, but Highlands outscored them 44-13 in the second half. Highlands produced 20 steals.

Highlands lost junior guard Sabrina Curren to an anterior cruciate ligament tear. Wiatrek said the injury has reminded her players of the need to stay in the moment.

“You can’t take anything for granted,” Wiatrek said. “Sabrina gets really emotional when she talks to them. She says, ‘Look what’s happened to me.’ ”

TODAY
Class 5A
Area round