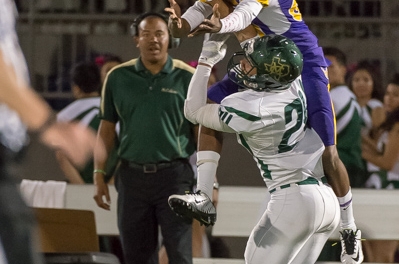 McCollum back Mike Ramirez recorded one rushing and one receiving touchdown against the Eagles.

It’s funny how tags and labels hung on teams don’t always stand the test of time.

Earlier in the year, the Eagles were Cardiac Brack. A team known for its comebacks.

The last two weeks, however, Brackenridge has demonstrated that it also can hold leads when other District 28-5A teams rally. The Eagles (5-3, 5-1) did it against Burbank Oct. 10 and repeated the feat Thursday at Alamo Stadium to defeat an inspired McCollum team 44-28.

“Coach (Willie Hall) came to the sideline,” Brackenridge senior receiver Lee Terrell said, “and told us to keep pushing. He said, ‘when we get down toward end zone, we have to keep pushing it.’ ”

The Cowboys forged a 22-21 lead with 5:24 left in the third quarter at the end of a time-consuming drive. Steven Sanchez provided McCollum the opportunity by recovering a muffed punt.

Junior back Mike Ramirez scored on a six-yard run. Cowboys quarterback Ralph Vidal dove inside the right pylon on the two-point conversion to put McCollum ahead.

The Cowboys had a chance to extend their lead when Alex Herrera blocked a 36-yard field goal attempt near the end of the quarter. However, McCollum was unable to capitalize.

Three plays after the Cowboys punted, Macco Marble (83 yards, 12 carries) regained the lead for Brack with a 13-yard scoring run. Terrell (166 yards, 6 receptions) gained most of the 67 yards on a screen pass from Antonio Lopez (16 of 28, 294 yards) early in the fourth quarter.

“I know our offense can be explosive,” Hall said. “I had no doubt that, at some point in time, they’d kick in. It’s just frustrating, sometimes, until it gets started.”

McCollum had a chance to regain the lead, but an apparent touchdown was overturned. Vidal (11 of 32, 268 yards) rolled out to find John Martinez in the end zone. However, officials ruled that the quarterback threw the ball when he was past the line of scrimmage.

Marble scored his second touchdown with a seven-yard run on the ensuing possession. The senior appeared to be down at the 2-yard line, but his second effort pushed him across the line with 4:36 remaining.

McCollum had one more big play to break. Ramirez (210 yards, 5 receptions) caught a screen pass, broke a tackle and streaked down left sideline for a 75-yard touchdown 30 seconds later.

The Eagles put the game out of reach with a 16-yard touchdown run from Trey Mathis, following an interception from Spencer Sherwood and a 33-yard field goal from Hernan Cabral.

Brackenridge scored twice and McCollum once at the outset, before either team was able to record a defensive stop.

With some determined running by Mathis (128 yards, 13 carries) on a 19-yard touchdown, Brackenridge led 7-0 on the game’s first possession. The Cowboys tied it just 33 seconds later, when Ramirez got behind the defense for a 60-yard score.

Lopez passed twice to Terrell to reach the McCollum 1, then scored on a quarterback sneak for a 14-7 advantage with 7:56 left in the opening quarter.

Then the teams settled into a defensive phase, which included a touchdown-denying interception from the Cowboys’ Steve Retana.

Following a fumble recovery by Brack’s Josh Leal, Jalen Davis made a catch in traffic for a 20-yard touchdown reception that provided the Eagles a 21-7 lead with 1:45 until halftime.

Three times on the ensuing kickoff, McCollum’s Noe Trevino appeared to be stopped. Each time he made a great cut to find running room and continue on his journey to a 99-yard kickoff return.

Trevino also broke up a pass in the end zone to keep the Cowboys within 21-14 at the half.

Boys basketball playoff picture These are the area teams that have a chance to qualify for the playoffs (in alphabetical order): Through Jan. 25 ALREADY QUALIFIED: none. [...]